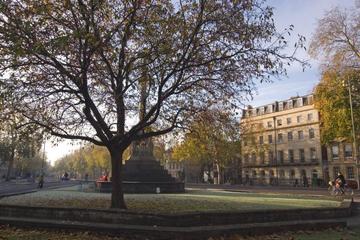 St Benet’s Hall was a Permanent Private Hall (PPH) of the University of Oxford from 1918 until its closure in 2022. Its origins as a Benedictine Hall went back to 1897.

It owed its original foundation mainly to the vision and energy of Fr Anselm Burge, Prior of Ampleforth Abbey in Yorkshire. At that time, the University of Oxford allowed for any Master of Arts to maintain a private Hall from which they could present candidates for degrees. These Halls took the names of their masters. At Fr Anselm Burge’s instigation, Ampleforth established a Hall on this basis. From 1897 until 1908, it was known as Hunter-Blair Hall, after Fr Oswald Hunter-Blair, the first Master. After Fr Oswald Hunter-Blair’s retirement, it was known as Parker’s Hall, after the second master, Fr Anselm Parker. In 1918, the University of Oxford established the new status of Permanent Private Hall, and Parker’s Hall became one of the first two PPHs (along with the Jesuit foundation of Campion Hall). It had the official title Aula Sancti Benedicti, or St Benet’s Hall.

The Hall was located at 103 Woodstock Road until 1904 when it moved to the former Grindle’s Hall on Beaumont Street (now demolished to make space for the Oxford Playhouse Theatre).  The Hall moved to 38 St Giles’ in 1922. In 2015, the Hall acquired an additional property at 11 Norham Gardens, formerly a convent of the Society of the Sacred Heart.

Originally the students of St Benet’s were monks of the Benedictine monastic order, studying for degrees at the University of Oxford.  This mission widened over the years; subsequently laymen and members of other orders also studied at St Benet’s. From 2015 women were also admitted to the Hall. At the time of the Hall’s closure, it was a community of monks, academics, graduate and undergraduate students of the University of Oxford, of all faiths and none.

For over one hundred years, St Benet’s Hall was a centre of scholarship, community, and prayer. It enriched the institutional landscape of the collegiate University, and touched the lives of thousands of students, monks, staff, and friends.

The St Benet’s Hall Boat Club can be contacted at sbhbccommittee@gmail.com.

An Alumni Association continues to exist, for alumni and friends of the Hall. Alumni should contact alum@sbh-oxford.org.

Any general enquiries concerning St Benet’s Hall should be directed to reception@ampleforthabbey.org.uk at Ampleforth Abbey Trust