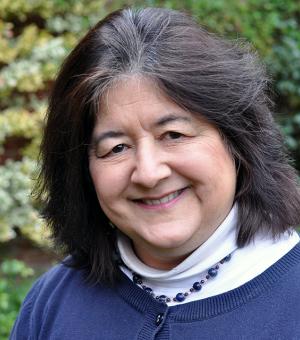 I was born in London, where I was educated at the French Lycée. My father was Indian and my mother grew up in Wales. As an undergraduate I read English Course II (a specialised course in Old and Middle English) at Somerville College, Oxford. I then spent six years as a nun in an enclosed Anglican community, before embarking on a doctorate at the University of Bristol, on the influence of medieval liturgy on Middle English Literature. I have been a member of the English Faculty of Oxford since 1991. Before coming to St Benet’s in 2004, I held a succession of College Lectureships in a wide range of colleges across the University.

At undergraduate level, I have taught courses in Old English, Middle English and History of the Language, and lectured for the Faculty in these areas, particularly on Old English grammar, Langland, and the Middle English mystics. Since becoming Senior Tutor, I have gradually relinquished most of my tutoring and Faculty lecturing, but still lecture widely on issues connected with Christian spirituality.

I have published in two areas: Old English poetry and the Middle English mystics. In Old English I have been keen to explore the intellectual sophistication underlying a very formalised poetic tradition. With the Middle English mystics, I have been interested in exploring statements and behaviours which may seem irrational and bizarre from a modern perspective, but which become coherent and meaningful when set in their medieval cultural context.

God is an Earthquake: the Spirituality of Margery Kempe (Darton, Longman and Todd, 1997).

'An approach to Christian aspects of "The Wanderer" and "The Seafarer" ', in Christian Tradition in Anglo-Saxon England, ed. P. Cavill (Boydell and Brewer, 2004).

'Changing Metaphors in "Guthlac A" and "Guthlac B" ' in Anchorites, Wombs and Tombs: Intersections of Gender and Enclosure in the Middle Ages', ed. E. Herbert McAvoy and M. Hughes-Edwards (University of Wales Press, 2005).

‘Julian of Norwich’ in The Blackwell Companion to Medieval Literature and Culture, ed. Peter Brown (Blackwell, 2006).