St Benet’s Hall traces its descent from the medieval Benedictine and Cistercian monastic colleges of Oxford, the earliest of which was founded in 1283. St. John’s, Trinity and Worcester are colleges which descend from such foundations. The monastic colleges aimed to provide the monks of their time with a formation in theology, philosophy or other useful subjects, such as canon law. St Benet’s was founded in the 19th Century so that Benedictine monks could study for a degree in any subject at Oxford University, and so equip themselves to teach in the Benedictine schools run by several monasteries in England, Ireland and the United States. Today, St Benet’s mostly provides an environment in which monks can study Theology at the highest levels from a rigorous academic perspective, but they are also welcome to study other relevant subjects, such as History or ancient languages. 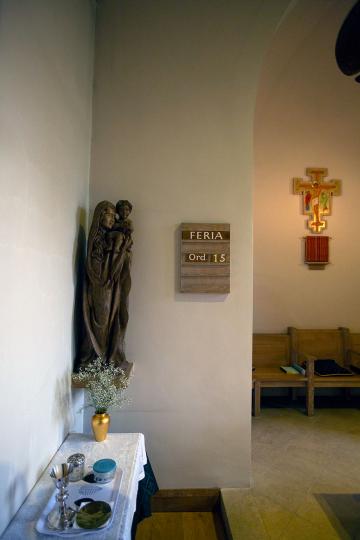 We have had studying here in the last few years monks from Ampleforth, Douai, Glenstal (Ireland), Roscrea (Ireland), St Louis (USA), Mount Angel (USA), Valyermo (USA), St Meinrad's (USA), Maylis (France), and St Ottilien (Germany), as well as other religious from England, Austria, Chile and beyond. Some have undertaken graduate studies for the MSt, MPhil or DPhil, others undergraduate or 2nd BA studies for a BA in Theology. We also welcome appropriately qualified monastics and religious as Visiting Scholars for periods of one or two terms.

It is also possible to take the ordination course at Blackfriars, the Studium Generale of the Dominicans in England, which is just down the road at 64, St Giles. Blackfriars offers a full course for the STB (Baccalaureate in Sacred Theology), which comprises 4—6 years of both Philosophy and Theology.  Full details of this course can be found on the Blackfriars website.  However, monks living at St Benet’s can choose to do only certain parts of this course, depending on their needs and what they have already studied.

A popular combination in the past has been to do the three-year Oxford BA course in Theology, followed by one or two years of courses at the Blackfriars studium, concentrating on the subjects necessary for Catholic ordination, such as canon law, sacramental theology and pastoral studies.

Whether studying for an undergraduate or graduate degree of the University of Oxford, or studying at the Blackfriars Studium, monastic students and their communities need to appreciate that they have undertaken full-time courses which are exceptionally heavy in the amount of reading and essay-writing required. Their home monasteries must be willing to release them from other responsibilities for the duration of their studies, and understand that even in the vacations degrees at Oxford require major amounts of reading to be undertaken. The intense nature of study at Oxford means that it is not helpful to student monks or nuns to ask them to return to their monastery during term-time for a retreat week or Chapter week. St Benet’s warmly welcomes serious monastic students, but has learnt from experience that a supportive attitude from their abbot or abbess and fellow monks or nuns in their home monasteries is essential.

Within St Benet’s, Mass is celebrated daily and the Divine office is recited in choir, with monastic Vespers sung in Latin on three evenings a week. There are one or two senior monks in residence who form the core of the monastic community and provide support in their monastic life to the student monks.  In recent years the number of monks in residence has usually been between four to six. Within a small academic community like that of St Benet’s Hall, this number seems to work well.

The monastic core of St Benet’s is part of its essential character, appreciated by undergraduates, graduates and tutors alike. While the students and tutors of St Benet’s come from all religious traditions and none, living alongside monks always proves to be a positive experience for them. In turn, monk students can gain from mingling with a very diverse student body, while maintaining the monastic character of their life.