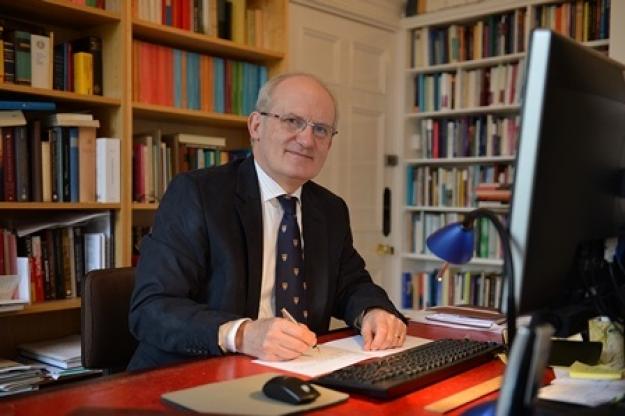 Professor Werner G. Jeanrond, who has led the transformation of St Benet’s from Oxford University’s last all male institution into a fully co-educational modern centre of teaching and research, is leaving the Hall at the end of August 2018 after six years as Master.

Professor Jeanrond, a leading international theologian, is taking up a senior academic post at the University of Oslo in September.

During a remarkable period at the helm of St Benet’s, Professor Jeanrond has overseen the admission of female students, a major expansion of the Hall through the purchase of a new building, the enlargement of the undergraduate and postgraduate student body, substantial advances in fund-raising, and a significant rise in academic performance.

Professor Jeanrond said: “I have enjoyed my time here immensely and am pleased to have been able to make a sustained contribution to the exciting journey of transformation the Hall is undertaking. These developments have been possible thanks to the unfailing support of the Ampleforth community, the encouragement of the University of Oxford, and the invaluable support of alumni and friends of St Benet’s Hall.

“The decision to leave St Benet’s was not easy for me. However the offer of the chair of dogmatics at Oslo will enable me to return to full-time academia and allay uncertainties flowing from Brexit.”

Professor Jeanrond concluded: “My wife, Betty, and I are looking forward very much to the new challenges that Oslo will bring. But we will certainly retain fond memories of Oxford and great affection for the unique St Benet’s community, of which we have been privileged to be part. Moreover, we shall always remain committed to St Benet’s Hall and encourage everybody to join us in supporting its further development.”

Sir Ralph Waller, Acting Chair of the St Benet’s Trust said: “Professor Werner Jeanrond has been an outstanding Master of St Benet’s Hall.  Under his Mastership the Hall has had high academic standards, a warm and friendly atmosphere, and has started to take both men and women students.  He has enlarged the Hall and done much to raise the Hall’s public profile.  We are very grateful both to him and his wife, Betty, and we wish them both every happiness in their new life in Oslo .”

A formal process is already underway to ensure a smooth succession in leadership at St Benet’s. Following the planned departure of Professor Jeanrond, an Interim Master is being appointed while the Trustees of the Hall choose a long-term replacement.

St Benet’s is firmly rooted inthe Roman Catholic Benedictine tradition as a foundation of Ampleforth Abbey, and for more than a century it educated male students only. That changed in 2015 when the first female students were admitted. This academic year the Hall admitted equal numbers of male and female students.

In another recent development, the Hall’s estate has expanded significantly through the acquisition of a former convent in North Oxford, in order to provide vital extra space for teaching study and student accommodation. The purchase was made possible in the first instance by a very generous donation from Lord Bamforth, the chairman of JCB, significant pledges by other donors, and continuing fundraising projects.