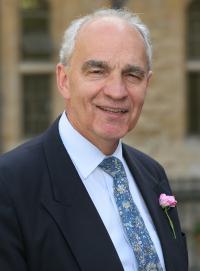 Professor Richard Cooper has been appointed Master of St Benet’s Hall for the next academic year. Professor Cooper, a distinguished Oxford scholar of the European Renaissance, takes up the post following the departure of Werner Jeanrond who led the Hall for over five years until the end of August.

In an Oxford career spanning forty years, Professor Cooper has held a variety of senior college roles and been deeply involved in many aspects of the life of the wider University, including as Junior Proctor and Chair of the Modern Languages Faculty Board.  His distinguished academic record has attracted important research grants and a number of visiting professorships at universities in mainland Europe and the United States. Other important activities have included major fund-raising projects.

Professor Cooper said: “I’m excited to be joining St Benet’s at this critical moment in its life. As someone with wide experience of the University, I’m well aware of what a special place St. Benet’s is.  I look forward to doing all I can to ensure that the Hall continues to develop and advance, while remaining true to the communal and cultural values on which it is founded. St Benet’s has embarked on an exciting journey and I am delighted to have this opportunity to be part of it.”

Professor Cooper will serve as Master for the entire academic year, during which time a formal process will take place to appoint the next long-term Master of St Benet’s. Professor Cooper takes up the post of Master following the withdrawal for medical reasons of Professor Peter Davidson as interim Master.

The Acting Chair of The St Benet’s Trust, Sir Ralph Waller, said: “We are  deeply grateful to Professor Cooper for his willingness to serve as Master. His great knowledge, experience and love of the University make him an outstanding person for this role. The leadership of St Benet’s will be in excellent and reliable hands during the next period.”

Professor Cooper is married to the Italian scholar, Emanuela Tandello, who is a Fellow of Christ Church. They have two sons and four grandchildren.

St Benet’s roots lie in the Roman Catholic Benedictine tradition and for more than a century it educated male students only. That changed in 2015 when the first female students were admitted. The Hall now admits balanced numbers of male and female students.

In another recent development, the Hall’s estate expanded significantly through the acquisition of a former convent in North Oxford, in order to provide vital extra space for teaching study and student accommodation.